As it turns out, A2 pistol grip is just as disliked in the real and milsim worlds. As such, these are typically swapped out in favour of grips such as the MOE, Ergo and Hogue grips. However a select few prefer the profile of the grip, with modifications to increase functionality. These two modifications include shaving down the middle-finger bump and completely stippling the grip to increase grip texture, mimicking the A1 grip of bygone years. 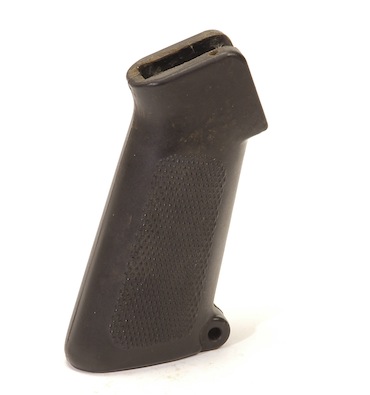 The evolution of stippling is prevalent in the civilian pistol world and has evolved from what was a functional, hastily-done modification to what can essentially be considered art.

Since the aesthetic objective of the build is utilitarian grittiness, this stippling exercise will attempt to replicate the results of a job that is done “in the sandbox” rather than something meticulously done on a craftsman’s bench.

This particular Block2 shipped with a tan grip. But from my experience, stippling tends to produce black-coloured burned plastic residue so a black VFC A2 grip was taken from the parts bin for this.

The finger hump is shaved down and the diamond-grid is ground off to be level with the grip. Note that the job isn’t very clean and is left as-is, because the stippling will cover up any imperfections in this stage. (ironic, considering stippling itself is an imperfection)

After stippling is complete, the grip is gone over with hand-file to reduce the grip, to taste. There is a fine line between useable grip and destroying your hands and gloves.